The ROF or Rossini Opera Festival: The yearly festival dedicated to the opera’s of that tornado that revolutionized the musical world in 1810-1820. Pesaro is a small and pretty town on sunny adriatic, one eats well, enjoys the sea, in the evening one saunters well dressed in the centro storico or along the lungomare. There is also much music to be enjoyed and the happenings are semi-chique considering that one can sip Prosecco next to Alfred Brendel, be seated in a box next to Raina Kabaivanska or ask Patsy (aka Joanna Lumley) to light one’s sigarette during the break.
The 3 opera’s of the ROF 2013 are Guillaume Tell, L’occasione fa il ladro and L’italiana in Algeri. 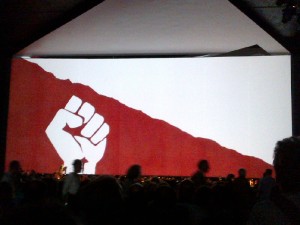 This year’s big attraction was meant to be Guillaume Tell. “Un’opera strana” was a comment from two well-read opera aficionado’s behind me. And one of the first Grand operà’s is indeed a little strange, with strikes of genius but also with long choral passages and little action. One can try to explain this with a mediocre libretto, or Rossini’s difficulty to adapt to the French style. The opera is undeniably quite long and includes the women’s terzetto in Act 4 and Jemmy’s aria in act 3, two often cut pieces.
Much has been written and discussed about Florez’s interpretation of Arnold, as the role is long and difficult, and his vocality does not seem fit for this heavier role. But he gets through the role and the first 3 acts without major problems. He sings a very moving Asile hereditaire in Act 4 but a mechanical Amis, amis in a discrete French. Big personal success and much applause of course, but Florez is an absolute star in Pesaro. I felt that Marina Rebeka’s voice was less controlled than in Amsterdam a couple of months back, with slightly screamed high notes and less precise coloratura (Mariotti’s tempi did not help) but she sang with a strong and steady voice. Like in Amsterdam, I did not like Nicola Alaimo as Tell, his stage presence and voice were not important enough to interpret the Swiss hero, neither in the heroic, nor in the more lyrical moments. In this Guillaume Tell, Jemmy’s aria, which is often cut, is re-introduced, but the game isn’t worth the candle neither for the piece on its own nor for the interpreter. Amanda Forsythe, whom I vividly remember as a spirited and sparkling Rosalia in L’equivoco stravagante in 2008 (Pesaro) sings well and with a good stage presence but with little voice and reducing the aria to a coloratura showpiece. The other singers were adequately cast although some of them had an execrable pronunciation.

The musical director Michele Mariotti starts with a well directed Ouverture, playing with well placed rubati, but as already said, the opera is long and needs a director who is able to keep the suspense down to the wire. Although undeniably a good director, Mariotti had some odd choices of tempi and was not able to span the musical arch to the end.
Graham Vick’s direction is all based on socialist symbolism and a repeated display of the Habsburgs’ violence and humiliation over the Swiss. It’s a bit repetitive at times but it does not necessarily disturb the action. It is in fact quite conventional, occasionally even trivial (the stairs at the end; the soppy movie of Arnold’s father…) but the ballabili were very moving and well danced, although part of the public did not appreciate them, booing the dancers (shouldn’t they boo the director instead??). All in all, nothing to get overly excited or overly disappointed about. Just a bit too much. 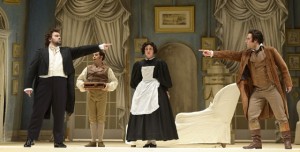 L’occasione fa il ladro: One of the loveliest of the farse written for the Venetian teatro San Moisé, if you ask me. It is clear from the music Rossini forges for this short opera (eg the elaborate aria for Berenice and intricate second finale, which comprises several different musical structures) that the short form of farsa (a comic opera usually in one act, originating in Venice or Naples) was too tight to Rossini’s musical fecundity and inventiveness.
The production is the one Jean-Pierre Ponnelle created for Pesaro in 1987. It is based on simple and traditional acting with painted scenes and few props. The group of singers reunited is a mix of young newcomers like Enea Scala and Victoria Yarovaya, and more recurrent ROF singers like Roberto de Candia and Paolo Bordogna. The cast is good although one could pick about the insufficient coloratura di forza of one, the strained voice in the higher register of the other, the slight backwards voice of a third or the somewhat stiffness in acting of a fourth. But the group effort made it a very enjoyable musical evening.

I would like to mention Elena Tsallagova in the role of Berenice. She sang the loveliest Arpa gentil I ever heard life, in the 2011 Viaggio a Reims production in Pesaro (the yearly performance given after the seminar dedicated to interpretation of Rossini’s music). Unfortunately she made a bad choice with Contessa di Folleville of the same opera in Ghent in 2012. With her Berenice I found again the beautiful and pure voice I heard in 2011. Her coloratura can be impeccable if she finds a director who gives her the time to deploy it properly. Given a wise selection of adequate roles (belcanto, mostly, I hope) I wish Ms Tsallagova a very fruitful career.
The (female) musical director was Yi-Chen Lin, who directed with precision and supported the singers .

The third opera was L’Italiana in Algeri, which Rossini, already a small celebrity now, after the successes of Tancredi and La pietra del paragone composed for the Venetian Teatro San Benedetto in May 1813.

Alex esposito as Mustafà sings with impeccable pronunciation and nice, fullbodied voice. Which is a bit short in the deeper register but this does not lessen the overall respectable performance which he sings with precise enough coloratura in the florid passages. Mario Cassi as Taddeo and Mariangela Sicilia as Elvira sang admirable and Davide Luciano (as always accompanied by his good friend the eunuch…) gave a good interpretation of his aria, which btw, was not composed by Rossini but by an unknown collaborator. Yijie Shi does not have Florez’s smooth voice but he is a fine singer and comes across the difficult part of Lindoro quite well. The Isabella of Goryachova, on the other hand, was a questionable point. Clearly at ease with the coloratura, with a velvety voice, she is, however, a clear mezzosoprano, which makes it easy for her to fling to the higher, but gives her some trouble in the lower notes, which are barely audible (I had the same impressions when she sang Matilde di Shabran‘s Edoardo in Pesaro last year). Why she keeps singing contralto roles is unclear to me, which, if satisfactory when heard on radio, is unacceptable in a theatre, as her voice does not expand or spread well (She was a nice, velvet-voice Zerlina in Zurich, though)
Unfortunately the musical direction of this Italiana was given to José Ramon Encinar who directs in an unimaginative, lifeless, tedious and vigor-less manner. Never have i heard the Comunale di Bologna play so mechanically and with so little energy.
Where this Italiana scores brilliantly, in my opinion, is the 60’s-inspired direction by the always inventive Davide Livermore. It is quite difficult to list all the actions that are happening on stage. But Livermore’s interpretation is probably encouraged by the nonsense-inspired libretto (din-din, bum bum, pappataci etc); What we see on stage is a constant movement, a flow of people and animation, a non-stop of gags, a sophisticated machinery who brings us from Rome to Algiers, which shows us a plane crash on stage and an aquarium with a shark. From this point of view the singers were also fantastic actors, Alex Esposito jumps, dances, hops and leaps with astonishing energy, Goryachova showed us an enviable figure as the seducing Italian lady, and the innumerable variety of supporting characters like tourists, stewardesses and housemaids fill the stage with action; What I liked most is the dancing on stage, especially during the concertati and the strette, which accentuates so well Rossini’s musical sparkle and energy. Too much? De gustibus…