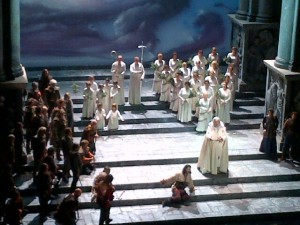 Verdi is not one of my favourite composers. There was, however, one point of big interest in Liege’s production of Attila: the singer who impersonated the title role. What a pleasure it was to hear the wonderful timbre of Michele Pertusi. His ability to articulate each syllable within a steady singing line and warm, smooth voice is reason of real pleasure of this afternoon. Odabella is Makvala Aspanidze, who, given the difficulty of her entrance aria, gets acceptably through the aria, though not flawlessly. Her “Oh, nel fuggente nuovolo” on the other hand confirms the somewhat strained high notes, heavy fiorettature and lack of legato, though she has an agreeable voice in the middle register.
I liked Giovanni Meoni. His Ezio lacked the required grandiosity but his voice is nice and he sings with taste and musicality.

Giuseppe Gipali’s Foresto has a light-bodied and a bit colourless voice but he sings correctly, as do the last two members of the cast, Papuna Tchuradze as Uldino and Pierre Gathier as bishop Leone.

Ruggero Raimondi, one of the world’s most famous singers, is here the scene director. His historical settings are simple and functional, based on a vertical-moving two-level scene depicting once the Roman setting with horizontally colum-pedestals and Attila’s tents.
As the score does not contain particular difficulties, the orchestra plays well under the plausible but impersonal baton of Renato Palumbo.