La Fenice, Venice: Everything is perfect, the theatre is wonderful, the ceiling is stunning in its fabulous blue. One is about to hear a very rarely performed title and one can but congratulate the courageous artistic choice of choosing Meyerbeer’s l’Africaine, a Grand Opéra infrequently staged nowadays. The curtain rises. The first thing one notices, [or doesn’t notice, more likely] is the minimalist staging, which indeed might seem a perfect choice for a very unlogic plot [very low-cost-looking, I might add]. The ship- and the following “Pays merveilleux”-scene are quite beautiful with the blue floor, the colourful dresses and the golden lamps. [Crappy old carpet, though, did the 70’s not call to get it back??] The singers, they are all wonderful and give their best: Gregory Kunde, one of the great baritenors of our time, although 60 years old, has a powerful voice, acts well and pulls off the incredibly difficult part of Vasco da Gama with relative ease. Jessica Pratt has bright, full-bodied high notes and is a sweet and delicate Inés. [Who the hell composed the cadenza that closes her entrance aria? It’s just a bunch of embarrassing high notes, incoherently screamed together]. Veronica Simeoni’s part, Selika, is a monster role which requires stamina and overall Simeoni reaches all the required notes without too many problems and even has audible low notes. [Barely sufficient to be a great Selika]. The director not only gives the singers time to sing their lines but accompanies wonderfully pulling all the stops of the Fenice orchestra, which plays flawlessly, to display a whole array of human emotions. 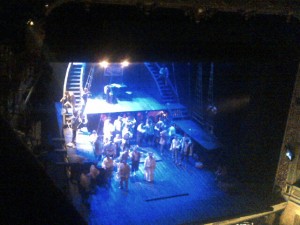 Especially the exciting finale of act I is well balanced [He can be quite long-winded and a bit heavy at times]. Veccia has the physique du role for a credible Nélusko. [That’s hardly enough to properly sing a role which requires sonorous and rich low notes and master the leaps to the high notes, all of which is lacking, sadly].

The chorus sings acceptably the beautiful melodies forged by Meyerbeer (Dieu que le monde révère…. Téméraire, téméraire etc) and moves fluidly across the stage conferring credibility to the choral passages. [Wanna talk about the useless video projections shown during the introduction and the entr’actes, which depict the themes touched by the librettist (slavery, conquests etc) in a 20th century gravy?]

Although I had mixed feelings (and overall Les Huguenots is musically more convincing) I praise La Fenice’s choice. Nice touch also, to commemorate two Rossinian farse, ~200 years after they have been composed-in Venice (although not for the same theatre).