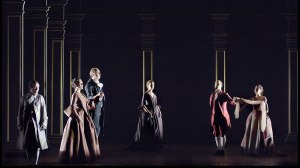 Two operas by Haendel were given on two consecutive evenings in Brussels, Tamerlano and Alcina, both staged, directed and conducted by the same team. I did’t enjoy Tamerlano half as much as Alcina. Andronico (Delphine Galou) didn’t show a very colorful voice especially approaching the low register but has a good coloratura as shown by the aria “Piu d’una tigre altero“. Jeremy Ovenden as Bajazet is far too short in the lower register to properly sing some of his arias, some of the notes are just not there anymore. With his unrefined singing I find him quite misplaced in baroque. Musically much better I find Sophie Karthauser as Asteria although i missed a proper characterisation of her role. I much enjoyed Ann Hallenberg as Irene and Christoph Dumaux as Tamerlano. Both showed affinity with the baroque style, an even and warm voice, and decent coloratura.
The cast of Alcina was in average much better and homogeneous. Above all the Alcina of Sandrine Piau, who, although with good runs and trials, excelled especially in the lyrical and slower passages. I much enjoyed the rest of the cast and although not perfect, the team spirit sparked life to the score. The only big disappointment : the precious little interest the singers gave to Italian pronunciation. With subtitles that were turned off for the da capo part, it would have been nice to understand some of the text. Hélas.

Both operas were well directed by Christophe Rousset. Staging was a bit monotone in Tamerlano with narrowing panels on both sides of the stage to give a perspective depth. The same panels are used for Alcina (with foliage this time) with as only prop the same chair as in Tamerlano. And same descent of clouds shortly before the end. A change of set came 20 min before the end: the panels disappeared and wooden boxes remained on wooden floor all in warm colours and timeless white clothing. This staging by Pierre Audi was originally conceived for the famous Baroque theater in Drottningholm, which still uses original decors. But overall it was bit boring, considering that baroque operas are hard to listen to with their endless sequence of recitativo and aria (and even more so Haendel, who was rarely inspired in the orchestral part, unlike Vivaldi). So a visual activity in sets would have been welcome (and which was surely intended in Haendel’s time thanks to the famous theatre machinery). Pierre Audi’s stage directions were very varied with people entering and exiting frequently, easing some of the monotony. The question remains to why such operas like Tamerlano and Alcina should be played with the same set as they have little in common.