How many Zauberflöte can one watch without start to be bored? I mean…the  priggish Sarastro is unbearable, the writing of the libretto awful with much racism and sexism, the horrible duet for the two priests etc etc etc etc… So well done David Hermann in giving the story a completely new interpretation. This was not without a proper tweak at the libretto, but OK….the horrible duet of the priests stayed horrible, but it was the first Zauberflöte (after my first and the Kosky one), where I did not leave somewhere before said duet. 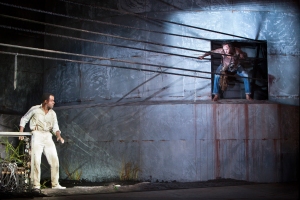 Except for the opening scene, which looks a bit post-apocalyptic and where the three ladies are constantly in contact with each other, moving like a menacing blob, the sets bring us to what looks like rural America, a small house in the prairie (I guess where people are held hostage and tortured). Sarastro is the ruthless, misogynistic leader who is into taxidermy, abusive of Pamina, and heartlessly kills the Queen and the ladies at the end. Papagena is a handicapped hostage in wheelchair and Papageno is an ape-like creature that crutches when frightened and hisses like a cat when he is scared. He brings hunted birds to the three ladies at the beginning. The ladies don’t offer a flute and glockenspiel to Tamino and Papageno, but a revolver and gas bombs, the latter of which Papageno uses to knock out Monostatos. The opera ends with Sarastro smoking a cigar on his patio (after killing the Queen and the ladies); Pamina and Tamino come back and shoot him dead, presumably ending the cycle of horror. It’s one of these staging which reading would have made me think it’s a bad Regietheater. Regietheater it is, but a refreshing interpretation well thought through. The sets are beautifully designed, alternate at almost every scene and the changes are swift. 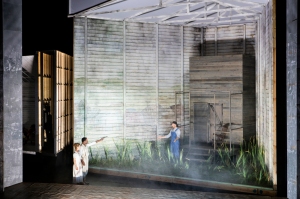 The orchestra gave a beautiful performance, playing clear and transparently with Jan Schweiger at its head, who made me fear the worst with the too solemnly played opening bars, but who excellently conducted with vibrant dynamism. Tarver has a hard time to find delicacy in the higher notes, Miss Sabirova was not completely fluid with a barely touched f in O zittre nicht, Josef Wagner also a bit hefty as Papageno, but overall the cast was very good. Lore Binon interpreted a beautifully sung, pure and clear-voiced Pamina. I’d love to hear more of her. Sarastro doesn’t seem to have secrets for Ante Jerkunica, who displays an attractive and warm timbre, especially in the deepest register, the best Sarastro I’ve ever heard.