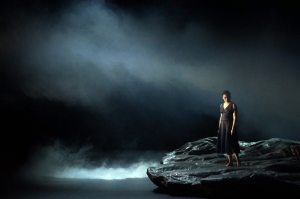 Aida…one of those mysteries….everybody knows the title. But it’s not that there were less or more empty seats than when rarities of Cherubini, Berlioz or Gassmann were played at De Munt/La Monnaie….still, it was choosen to stage a famous title such as Aida (where the libretto never takes off, the action is succinct and stripped to a minimum and for which the music is quite long) without having the necessary forces to do so: If one does not have a perfect match of conductor, director and singers, the opera starts to bore at very early stage. In this production the setting is not without interest. Greek actor/director Stathis Livathinos puts a huge rock on stage which changes colour and becomes translucent with different types of lighting and which is used to sing and act on and around. Except for a cement square just above said rock the scene is completely empty but Livathinos’ setting is suggestive and evocative in using balanced colours, lighting and movements. Dancers are present on scene but they barely move. Although the director used some interesting ideas the setting did not conceal the shortcomings of the overall poor musical interpretation (at least of the cast I heard on that particular day). The voices displayed various opprobrium’s that ranged from wide vibrato singing, screams, poorly projected voices, sinking notes, no legato, … and if this was not enough, when the final chords of a piece ended, or when there were large passages of pianissimo (such as in Immenso Fthà) one was immersed in rumble of noises from outside like screaming children, chirping birds, quacking ducks, roaring airplanes and the like. Altinoglu, who I usually appreciate, was not able to get the imprecise orchestra inspired. The heat (27°C) did the rest so I left at the interval.

Refreshing therefore, to see an non-professional performance of an opera at Bozar. It is always a pleasure to hear singers of an opera academy. It has the benefit, except for the singers to get exposure, for the public to hear forgotten rarities, for which the main opera house is too cautious, and, I feel, too dismissive of the music. But Telemann’s music is varied, colourful, descriptive, heterogeneous, and although the main text is German, he adds arias in French and Italian language and style, which he perfectly assimilated, and merged with great taste.

Although the title of the ancient legend, Orpheus, refers to the unfortunate lovers, Telemann’s plot really evolves around queen Orasia, who provokes Euridice’s death, makes the Bacchantes kill Orpheus when repudiated and guild-ridden kills herself. The thing with fresh voices is that although there is already a great degree of professionalism, inexperience or nerves might explain an over-cautious approach, a little lack of colours, sometimes a weak projection or unfocused low or high notes etc. Nonetheless I feel some of the voices have amazing potential and I much enjoyed the beautiful timbre of Julie Gebhart and Sylvie Bedouelle, the emotional variety of Morgane Heyse and the vocal range of Louise Kuyvenhoven. All showed an acceptable coloratura although the German pronunciation could be improved during the sung pieces. Arthur Rozek was most appreciated in the more delicate passages. The setting was simple but effective. Only shame that Guy Joosten every now and again falls into the traps of most modern directors: platitudes, orgies, singing in underwear etc etc. and funny that the confidant is usually unkind (Ismene to Orasia, Alisa in Lucia, etc….). Musically, although not vibrant or energetic, Korneel Bernolet keeps it light, conducts with the right tempi, attention to fluidity and supports the singers well.