The season at the Munt opened with Mozart’s Magic Flute. A season which, for a change, includes two 19th century Italian staged opera’s which are neither Verdi nor Puccini and has a mere 30% of contemporary operas. Unfortunately, Meyerbeer’s grand opera is not staged (though we are still waiting for the coproduced-but-never-staged Muette de Portici, or a re-staging of the wonderful Py/Minkowsky Huguenots with a excellent 2nd cast headed by John Osborn).

Magic flute, then, a very traditional title, directed by an unconventional director. Magic flute is one opera, which, in my opinion, HAS to be re-interpreted. The sun against the darkness, Pamino in search of Pamina, Monostatos, are the symbols of the progressive/active patriarchy against the evil/passive matriarchy, the manipulation of the natural for its own good, with a hint of racism and misogyny. An odious text, which got an enlightening new vest in last year’s Gent production by David Herman. On another planet we are with Castelluci’s view on the subject. While the overture stands for the darkness (all in black, a neon tube light is shattered etc), Act I is all in white. And when I say all, I mean everything. The people, the clothing, the shoes, the background, the props, the floor, everything. All singers and all dancers act with small and slow movements. The singers have doubles, which mirror their movements and even lip sync, the dancers behind them dance slowly, creating intertwined choreographic forms which are enhanced by the use of feathers and of slowly rotating platforms. No spoken dialogue, just one musical piece after the other. At the end of act one bizarre shapes (architectural forms designed by algorithms by Swiss architect Michael Hansmeyer) move together with the singers, dancers and the doubles creating a huge, white, barock cathedral.

Act two is totally different in that the setting has contemporary features. It starts with eerie music while pregnant women pump their milk from both breasts. I was too busy looking at the technicality of the process to read the text projected above them so i missed the philosophical point. However, with these ladies the mother figure started to get its recognition (the Mother/Queen of the night was also the only figure which was not doubled). The setting was not white anymore but all-beige, the floor, a separating wall, the clothes even the hair. The music starts, but while Act I was played without text, in act two newly created text is interposed into the musical pieces and recited. First by five women, later by five men. The women, one by one, tell us, within 1 minute each, about the moment they became blind, who at a small age, who suddenly while on a plane etc. They tell about the world they see, a world made of shadows and darkness. The men on the other hand tell about the moment in their lives when their skin was burnt, who through scalding oil, who through fire, an explosion etc, a world made of desperation, scarring skin and the moment of “too much light”. Latest by then it becomes clear that Castellucci opposes the moment of lights to those of shadows and pulls a parallel to the darkness and light of the Queen and Sarastro. 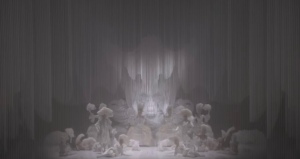 Castellucci certainly finds a way to make us think and breaks with conventions, but the message is so overwhelming that the music and the libretto lose all connection with their creators. The orchestra, which includes 18th century brass and timpani, has not much life, I heard Manacorda direct much better. None of the singers have any particular flaws but none are really memorable or touched me in any way.