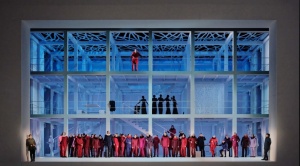 Too rarely is this masterpiece performed. It has a considerable length (usually between 4 and 5 hours) but the plot is well constructed and the music has practically no drops in tension, Meyerbeer creating a vivid intuition of dramatic situations and varied orchestral colours. The production by Andreas Kriegenburg is visually very pleasing, the cube structure fills the stage but feels very sterile, the moving stage allows to see what happens in two different places at the same time, the costumes are also beautiful. But choreography wise it is a bit boring. In Kriegenburg’s production the singers are often motionless, which is the antithesis of grand opera with its dramatic plot and finales and its amount of characters including the masses, who play a huge role. Also, it is not clear why the action should play in 2064. Does he want to say this tragedy can happen anytime? Would this be the only reason? Mariotti conducts well. At least much better than in Berlin. And although i wished a more dramatic rendering of the gloomy and sinister atmospheres (and i also had hoped in some grandiloquence) I still enjoyed his interpretation. Pity for some of the cuts in music. Although Meyerbeer himself didn’t mind and even proposed some of them, as comparison I can say that for the same amount of time, Minkowsky in Brussels proposed an almost complete score). 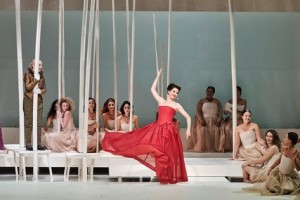 Jaho as Valentine has a beautiful, luminous voice. In the higher register that is, but it sounds a bit empty the lower she goes and her low notes are insufficient for her duet with Marcel and the one with Raoul. Nicolas Testé misses the extreme low notes but sings overall very well. Yosep Kang has all my appreciation for having stepped in last minute. His voice has a nice timbre in the middle register, his French is good, and he fills the huge Bastille room, but the role is heavy and this is audible at the high notes where he pushes the voice to its limits. Excellent Lisette Oropesa (who also steps in last minute replacing Diana Damrau) but has no problems whatsoever, she runs up and down the pentagram with no problems, her voice equal over the whole range, she delivers a credible performance and gets a long and deserved applause after her 2nd act aria. I never quite understood why Karine Deshayes is so praised in her home country. I heard her in Rossini and was disappointed. Meyerbeer suits her much better. I also thought Florian Sempey was very good as Nevers. Overall this Huguentos were not as excellent as the Brussels production (I keep coming back to this one, but except for the ballet everything was perfect, from Minkowsky’s stylistically impeccable conducting, over Py’s dramatic direction to the second cast led by a superb John Osborne with Henriette Bonde-Hansen and Ingela Brimberg) but still a very enjoyable evening. And what a wonderful music!!