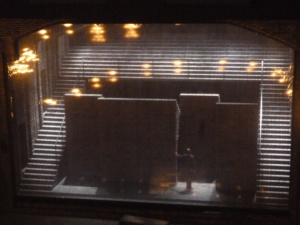 Not a highlight as I had hoped. Marc Minkowski and Olivier Py re-united to repeat the wonderful experience of les Huguenots a few years back..? Hardly. At least not Py’s direction. Large black brick stairs, wide as the whole scene almost, open the opera. Throughout the plot the stairs move in different directions and position to change the stage into the required setting. On paper it all sounds quite clever… was it not for the brick as material, painted black. It’s just too much black, and the painted bricks just give an impression of something old and cheap…as if someone would paints its walls and paint over the sockets. But black was all the monotonous rest as well, and one had the impression of being in a shady cruising area. The chorus was an annoying something one has to put up with, I had the impression, as often it was standing like, well, a chorus, instead of taking part in the action. The rest, not very original, were Py’s all time classics (half-naked men, leather, dog masks….) mixed with some highlights (Hamlet’s “glitterface” dead father).

Luckily the musical part was much better. The orchestra of De Munt/La Monnaie, for once, played lusciously and expressively under the baton of Marc Minkowski (how come HE is able to get those sounds out of the orchestra…?). Pacing and style were spot on. MM gets the orchestra to go from vigorous to tender in no time and directs the somewhat uninspired music perfectly.
The singers all did a fair good job. My only reserve goes to Grupposo (replacing a suffering Jennifer Larmore), who seems to loose control in the higher area of her voice, but renders a very motivated queen Gertrude. Lenneke delivers a controlled but touching mad scene and Laertes’ short role is ideally sung by Remy Mathieu. Claudius’ voice was dark enough to interpret the villain and the title role, sung by Stéphane Degout, one of the rising stars of opera, although personally he never really convinces me, sings correctly and he connects with the character, delivering a convincing Hamlet. Smaller roles all sang well.