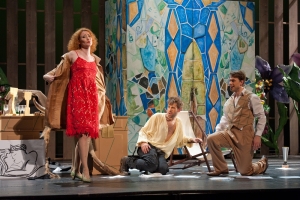 I believe it is always a good idea to have students of a music academy perform on an official stage, for at least two reasons: the students get the feeling of a formal public, and the public usually gets to hear operas that are rarely performed. In Aachen the music academy of Cologne performed Le toreador by Adolphe Adam and L’heure espanol by Ravel.

Both performances were, everything considered, extremely enjoyable. In Le toreador Larisa Vasyukina has a beautiful timbre and delivers all the difficulties of the florid part very well. I also enjoyed very much Agris Hartmanis although his voice is sometimes covered by the orchestra. Tobias Glagau has much potential, but he sometimes reverts to a throaty emission. 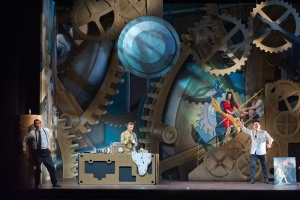 The cast of L’heure espagnole was equally good. The witty plot was very well sung by all cast members where I especially enjoyed Panagiota Sofroniadou and Fabio Lesuisse as Concepcion and Ramiro. All singers were also very good actors

Herbert Görtz directed with much verve and Raimund Laufen with charme an orchestra that played with much clarity and elan. Setting-wise, Le toreador was functional and enjoyable, L’heure espagnol beautiful.

Personally I found the evening a success and it left nothing to be desired. A praise to the Theater Aachen for including student performances into their season.
A practice that is very much desired if only for the sheer motivation of the singers.