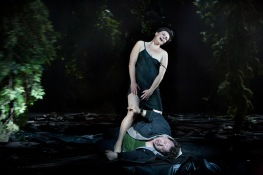 For years I tried to listen to Wagner. But it’s just not my thing. And the 3-4 times I went to see it life (Tristan, Götterdämmerung, Holländer and one more I think, and only because it was part of my subscription) it turned out to be an expensive nap and a repetition of steps which followed the same sad pattern: 1-Enthusiastically think about an evening at the opera, 2-Listen carefully forcing myself to scratch together a bit of curiosity, 3-Feel the tiredness come up after 5-10 minutes, 4-being woken by thunderous applause and leaving the opera at the first interval. Big was my surprise when I assisted at Tannhäuser at the Flemish Opera in Ghent a few days ago. The ouverture is melodious, there are arias, duets, ensembles, instead of endless non-stop music, and not too bad ones at that. Of course for somebody who hungers for belcanto, everything seemed different, main thing being that singers seem to scream. But at least this opera made me want to stay another act rather than running off like a scalded cat.

I am really not the right person to talk about Wagnerian voices. But Tannhäuser sounds like a murderous role, a huge range. And I admired Andreas Schager who was up to task. Liene Kinca as Elisabeth had a beautiful timbre and never forced her voice. It rather sounded as if Venus (Ausrine Stundyte) and Walther von der Vogelweide (Adam Smith) had slight difficulties when notes rose too high. But I liked Daniel Schmutzhard and Ante Jerkunica in their respective roles as Wolfram von Eschenbach and Hermann. Calixto Bieto kept the things in black and white, tree tops hanging from the ceiling on black background in the first act, clean and minimal white lines in the second act. I don’t go into the interpretation as already reading the libretto awakened a mix of hilarity and ridiculousness. But the orchestra and chorus played and sang well.